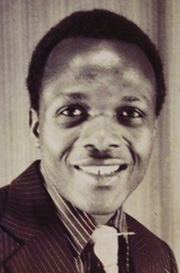 TSHIMANGADZO BENEDICT DASWA: AT LAST, ONE OF OUR OWN IS A SAINT!!!

I am so excited, with the news that our own kind, our own flesh and blood, our own countryman is to be beatified. On September 13, 2015, Tshimangadzo Samuel Benedict Daswa will be beatified. He was born in Limpopo, Mbahe village to be precise. I appreciate Bishop Emeritus, Hugh Slattery M.S.C. and Bishop Joaó Rodriguez of Tzaneen for standing up and upholding the virtues of Benedict Daswa. The virtues of faith, family life, charity and zeal for evangelization. We owe our gratitude to the Missionaries of the Sacred Heart, the Vicar General Fr Philemon Thobela, the clergy, religious and laity of Tzaneen Diocese for promoting the cause of the Servant of God, Benedict Daswa. Without their hard work, prayers, research, writing down stories and testimonies, fundraising and many other initiatives, we would not be having this beautiful occasion.

For one to be declared “blessed” or to be beatified, a miracle should be proven. But for a Martyr of Faith, one does not have to meet this requirement. The diocese of Tzaneen presented his case to Mother Church, as someone who was killed for his belief in the teaching of Christ. He believed that some popular beliefs of his own people in witchcraft, were against the faith and he opposed them. He opposed witch-hunting which led to the persecution and even death of many innocent people. He opposed the use of “muthi” or traditional medicine to win soccer games. He refused to pay R5 to his village, as everyone else was expected to do, to solicit the services of a diviner, who was supposed to come and “smell-out” witches who could be responsible for storms and lightning strikes in the community.

The Church teaches that; “All forms of divination are to be rejected: recourse to Satan or demons, conjuring up the dead or other practices falsely supposed to “unveil” the future. Consulting horoscopes, astrology, palm reading, interpretation of omens and lots, the phenomena of clairvoyance, and recourse to mediums all conceal a desire for power over time, history and, in the last analysis, other human beings, as well as a wish to conciliate hidden powers. They contradict the honour, respect and loving fear that we owe to God alone. All practices of magic or sorcery, by which one attempts to tame occult powers, so as to place them at one’s service and have a supernatural power over others – even if this were for the sake of restoring their health – are gravely contrary to the virtue of religion. These practices are even more to be condemned when accompanied by the intention of harming someone, or when they have recourse to the intervention of demons. Wearing of charms is also reprehensible. Spiritism often implies divination or magical practices; the Church for her part warns the faithful against it.” (Catechism of the Catholic Church, 2116-2117. Cf Deut 18:10, Jer 29:8) This is what Daswa died for. He was standing solidly on the side of truth and of the Gospel.

He was stoned, bludgeoned to death and his body was covered with boiling water in 1990. Thanks to the Diocese of Tzaneen for inviting the whole of Southern Africa to Tzaneen. We are grateful to the Bishops’ Conference, especially the General Secretariat for supporting the cause. Recently, we had a visit by Fr Sakhi Mofokeng and Fr S’milo Mngadi from SACBC, who came to explain to the clergy OF Klerksdorp, the story of Benedict Daswa and the cause for his beatification. They left us with good materials to share with faithful of the diocese. They shared with us a prayer to implore favours through the intercession of the Servant of God Tshimangadzo Daswa. They also gave us a little prayer which can be prayed by anyone anywhere. It goes like this “Loving God, keep me free from all deeds of darkness. Protect me from evil spirits and all the powers of evil. Following the example of Benedict Daswa, make me a true apostle of life in my family and in society. May your light, O Lord, shine upon me and through me. Amen.

Let us try as believers to make the story of Tshimangadzo Benedict Daswa known to all people. Let us encourage public veneration of this special man: a father, a husband, a catechist, a school principal and a convinced Catholic. Each one of us in the Conference area has been asked to give a R5 coin in memory of Benedict Daswa. These coins are to be sent to Tzaneen, where the diocese is hard at work, trying to put up an appropriate shrine for this first martyr and saint-to-be of Southern Africa. Yes, the pope is not coming for this beatification, but some of the Cardinals from Rome will be here. The most important thing is that all Catholics and people of goodwill, as far as I am concerned, should be there. This is a special moment, a moment of truth and grace. This is an acknowledgement of the hard work of all missionaries. They brought the faith – and people like Daswa embraced it and died for it. It is an acknowledgement that we are now a maturing church. We are starting to produce our own saints. This is the Church of Africa, coming of age. It is an acknowledgement that there are many other saints in our church and community cemeteries who are still to be recognized by the whole church. This is just a beginning.

His story reminds me of the book of Revelation 7: 13ff. ‘Who are these, dressed in white…….? These are the people who have come safely through the terrible persecution. They have washed their robes and made them white with the blood of the Lamb.”

Let us pray for Tzaneen Diocese. It has a small but vibrant Catholic Population. Most of the people still hold on to Traditional Religions and do not want to embrace the Gospel of Jesus Christ. Most of them rely on the powers of ancestors and have no regard for the Blessed Trinity. Culturally it is a very rich diocese. The Venda people are kind, hardworking and intelligent people. Their landscapes are breath-taking. There is cultural diversity and cultural dynamism in the whole area. I see it as a fertile ground for true inculturation. I believe that the wonderful cultural values they keep, are the seed-beds of the Gospel. The Catholic Church, the Lutheran Church and Swiss Mission among others, have done a lot, trying to evangelize the people, but it has not been easy. Going to that area you realize that it is very difficult for some people to give up Traditional Religions for Christianity.

Let us pray for more vocations and for passionate evangelizers For Tzaneen. One dangerous phenomenon in that diocese is the presence of a new form of Pentecostalism, with an overemphasis on deliverance. Most of the people of the area, especially young people, are exposed to their “deliverance services” every week. Their services include mass hysteria and mass deliverance where people fall on the ground, scream and roll in front of cameras and in public view, each and every week. They are made to throw up and to humiliate themselves in front of everyone. We must also pray for this diocese because there is a strong fear of witchcraft and an exaggerated fear of demons: fertile ground for the mushrooming of sects and strange religious movements. People are still being accused of being witches; but thanks to the government, the university of Venda and the judicial system; witch-hunting is on a decline. Tzaneen is an economically impoverished diocese, and for that reason we need to be generous and support them to best of our ability. May the Servant of God, our first martyr and an apostle of life: Tshimangadzo Daswa, pray for us.